Looking for something to make your summer more interesting? Check out this selection of National Book Award winners in our collection. The descriptions are taken and lightly edited from the publisher descriptions.

These titles are housed in Cedar Rapids, but you can request them to be delivered to any of the other centers at any time.

The Blood of Emmett Till by Timothy B. Tyson, Call Number: 364.134 T994b
NOTE: But what actually happened to Emmett Till—not the icon of injustice, but the flesh-and-blood boy? Part detective story, part political history, The Blood of Emmett Till “unfolds like a movie” (The Atlanta Journal-Constitution), drawing on a wealth of new evidence, including a shocking admission of Till’s innocence from the woman in whose name he was killed.

Bunk: The Rise of Hoaxes, Humbug, Plagiarist, Phonies, Post-Facts, and Fake News by Kevin Young, Call Number: 001.95 Y737b
NOTE: Bunk traces the history of the hoax as a peculiarly American phenomenon, examining what motivates hucksters and makes the rest of us so gullible. Disturbingly, Young finds that fakery is woven from stereotype and suspicion. He chronicles how Barnum came to fame by displaying figures like Joice Heth, a black woman whom he pretended was the 161-year-old nursemaid to George Washington, and What Is It?, an African American man Barnum professed was a newly discovered missing link in evolution. Bunk then turns to the hoaxing of history and the ways that forgers, plagiarists, and journalistic fakers invent backstories and falsehoods to sell us lies about themselves and about the world in our own time, from pretend Native Americans Grey Owl and Nasdijj to the deadly imposture of Clark Rockefeller, from the made-up memoirs of James Frey to the identity theft of Rachel Dolezal.

The Color of Law: A Forgotten History of How Our Government Segregated America by Richard Rothstein, Call Number: 305.8 R847c
NOTE: The Color of Law offers “the most forceful argument ever published on how federal, state, and local governments gave rise to and reinforced neighborhood segregation” (William Julius Wilson). Exploding the myth of de facto segregation arising from private prejudice or the unintended consequences of economic forces, Rothstein describes how the American government systematically imposed residential segregation: with undisguised racial zoning; public housing that purposefully segregated previously mixed communities; subsidies for builders to create whites-only suburbs; tax exemptions for institutions that enforced segregation; and support for violent resistance to African Americans in white neighborhoods.

The Evangelicals: The Struggle to Shape America by Frances FitzGerald, Call Number: 277.3 F553e
NOTE: Evangelicals have in many ways defined the nation. They have shaped our culture and our politics. Frances FitGerald’s narrative of this distinctively American movement is a major work of history, piecing together the centuries-long story for the first time. Evangelicals now constitute twenty-five percent of the American population, but they are no longer monolithic in their politics. They range from Tea Party supporters to social reformers. Still, with the decline of religious faith generally, FitzGerald suggests that evangelical churches must embrace ethnic minorities if they are to survive.

The Future Is History: How Totalitarianism Reclaimed Russia by Masha Gessen, Call Number: 947.086 G392f
NOTE: Gessen follows the lives of four people born at what promised to be the dawn of democracy. Each of them came of age with unprecedented expectations, some as the children and grandchildren of the very architects of the new Russia, each with newfound aspirations of their own–as entrepreneurs, activists, thinkers, and writers, sexual and social beings. Gessen charts their paths against the machinations of the regime that would crush them all, and against the war it waged on understanding itself, which ensured the unobstructed reemergence of the old Soviet order in the form of today’s terrifying and seemingly unstoppable mafia state. 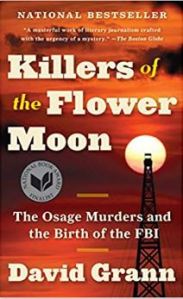 Killers of the Flower Moon: The Osage Murders and the Birth of the FBI by David Grann, Call Number: PB GRA
NOTE: In the 1920s, the Osage found themselves in a unique position among Native Americans tribes. As other tribal lands were parceled out in an effort by the government to encourage dissolution and assimilation of both lands and culture, the Osage negotiated to maintain the mineral rights for their corner of Oklahoma, creating a kind of “underground reservation.” It proved a savvy move; soon countless oil rigs punctured the dusty landscape, making the Osage very rich. And that’s when they started dying.

Locking Up Our Own: Crime and Punishment in Black America by James Forman, Call 364.973 F724L
NOTE: Forman shows us that the first substantial cohort of black mayors, judges, and police chiefs took office amid a surge in crime and drug addiction. Many prominent black officials, including Washington, D.C. mayor Marion Barry and federal prosecutor Eric Holder, feared that the gains of the civil rights movement were being undermined by lawlessness―and thus embraced tough-on-crime measures, including longer sentences and aggressive police tactics. In the face of skyrocketing murder rates and the proliferation of open-air drug markets, they believed they had no choice. But the policies they adopted would have devastating consequences for residents of poor black neighborhoods.

Never Caught: The Washingtons’ Relentless Pursuit of their Runaway Slave, Ona Judge by Erica Armstrong Dunbar, Call Number: 306.362 D898n
NOTE: When George Washington was elected president, he reluctantly left his beloved Mount Vernon to serve in Philadelphia, the temporary seat of the nation’s capital. In setting up his household he took Tobias Lear, his celebrated secretary and eight slaves, including Ona Judge, about whom little has been written. As he grew accustomed to Northern ways, there was one change he couldn’t get his arms around: Pennsylvania law required enslaved people be set free after six months of residency in the state. Rather than comply, Washington decided to circumvent the law. Every six months he sent the slaves back down south just as the clock was about to expire. Though Ona Judge lived a life of relative comfort, the few pleasantries she was afforded were nothing compared to freedom, a glimpse of which she encountered first-hand in Philadelphia. So, when the opportunity presented itself, Judge left everything she knew to escape to New England. Yet freedom would not come without its costs. At just twenty-two-years-old, Ona became the subject of an intense manhunt led by George Washington, who used his political and personal contacts to recapture his property.

This site uses Akismet to reduce spam. Learn how your comment data is processed.